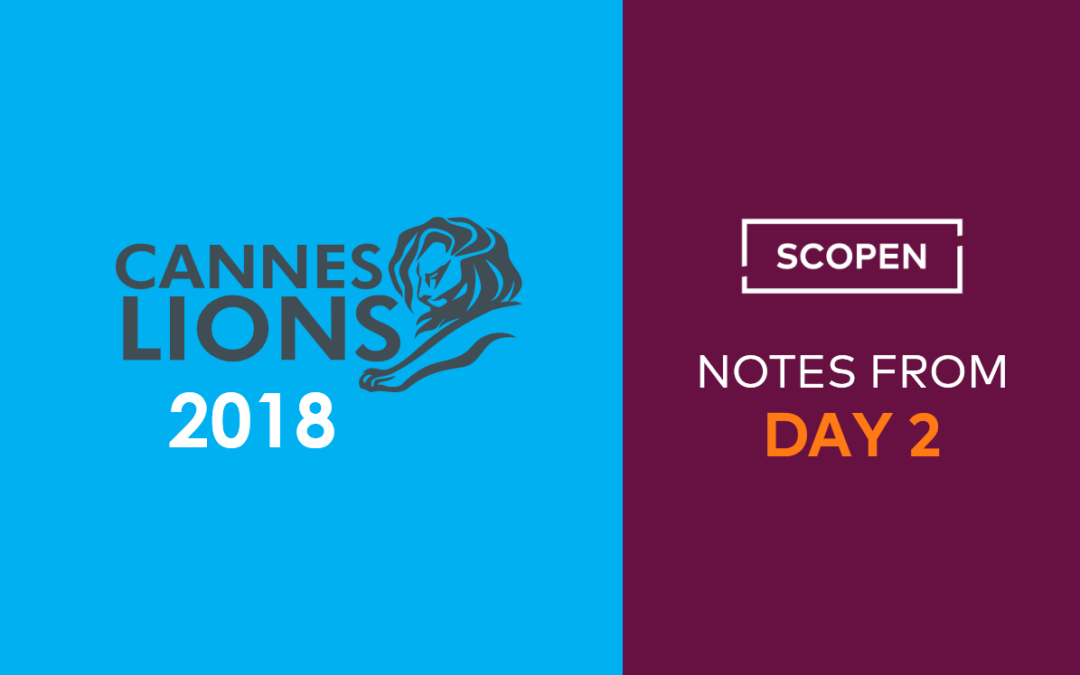 An emotive round table discussion took place with HRH Sarah Zeid, Princess of Jordan, Sir John Hegarty (BBH Founder) and Corinne Woods, CMO from the UN World Food Programme (WFP) to encourage the creative community to use its skills and move the people to understand that there are 130 million people dying of hunger in the world.

The UN WFP took food to 91 million people last year and the Princess of Jordan explained what is happening currently in a country like Burundi from where she flew to speak at Cannes. All three spoke about the importance of using cinema, the “mother of all screens”, to transmit powerful, emotional messages which will make citizens of the world sit up and take notice. The UN knows how to speak to governments but does not know how to speak to the average citizen and certainly not to millennials.  This is where the creative community can help.  John Hegarty created a touching film to promote the downloading of the app ShareTheMeal.

Cannes Lions is donating all money received from nearly 400 entries for campaigns for Sustainable Development Goals to charities.

Thandie Newton, well known British actress and Star Wars superstar, spoke about how difficult it was to grow up in Cornwall – an English county –  being daughter of a Zimbabwean woman and an Englishman. She was able to make positive change within the community and raised awareness that a dual heritage, mixed race girl was not a danger. She changed people’s minds through creativity in dancing. She used her craft to break the walls of ignorance, through being curious and through trying to be included among the other children, and showing that differences shouldn’t be seen as threatening.

Edward Enninful, editor of Vogue UK, knew that he wasn’t handsome, but rather interesting looking,.. and he wanted to be a model. Then he changed his mind and wanted to be an editor. He wants to push diversity of perspective and nurture the new generations.

Tiffany Warren, Chief Diversity Officer at Omnicom, wants representation in teams because those teams have an impact on business.

ACT  (Advertising Community Together) act-responsible.org, included in their reel the campaign of Adios Malaria. The Malaria pathogen was used in four different stages to create traditional capulana patterns and fabric with the aim of reducing Malaria in Mozambique, the country with most deaths from Malaria in the world. A Campaign from TBWA Hunt Lascaris  was screened.

Malcolm Poyton, Global ECD at Cheil, made the audience laugh talking about Anatidaephobia, the fear that you are being watched by a Duck to introduce how Technology will be the saviour of creativity.

Cheil and Samsung in India have combined the old technology of Morse code with the new technology of smart phones so that deaf and blind people around the world can communicate and feel what that cannot see nor hear. They now have a two way communication tool.

He also presented how they have developed software in Spain to identify dyslexia at early stages.

1.3 million seniors/aged live alone in South Korea. Cheil created ‘LifeSavingTV’ so that if the TV is not switched or turned off after 24 hours a social worker can identify that there is a problem with that person who is living alone.

It only takes two words to do what you want, and those are technology and creativity.

Sid Lee shared that even if technology makes starting a relationship easier than in the past, Millennials are having less sex than the previous generation and today there are 6% more virgins than there were in the 90s.

In one of the most anticipated seminars this week, Arthur Sadoun, Global CEO of Publicis Groupe explained that Publicis Groupe missed all of us at Cannes. It has been a huge sacrifice not to enter awards and it was not for PR reasons as has been reported. The Groupe needed to transform themselves and they didn’t have the money so Publicis needed to make this sacrifice of not entering awards for one year!

Marcel is a connectivity network of 80,000 talented people. It is about four powers: opportunity, connectivity, knowledge and productivity. It is a game changer.

Nick Law – Chief Global Creative Officer for the Groupe –   explained the two features of Marcel: firstly to identify the experts in specific territories, disciplines, clients, brands,… and secondly the  opening of briefs to 80,000 people so that they  can work together directly on the app.

Sadoun commented on a very important fact that is that marketers are not spending less in Marketing, they are expending more, but less with agencies.  So more activity is being created in house or spent directly with key tech media.

Sadoun defended Cannes Lions as being crucial for the industry for two reasons: ‘Our work needs to be judged firstly so that we understand our level and recognize our people; and secondly for inspiration, and the Festival is bringing this back this year”.

Arthur recognized he owes his career to creativity. When you have good ideas you always win!

Arthur, Nick and Carla responded to 20 questions from 20 global leaders from our industry and this helped to understand what Marcel is and why the decision was taken.

The audience asked about consultancies and Arthur responded that nowadays Accenture can’t compite with agencies because they don’t have the talent. But that Accenture works on business transformation and agencies work on creativity and innovation and both will converge at the end of the day.

Notable Awards of the evening