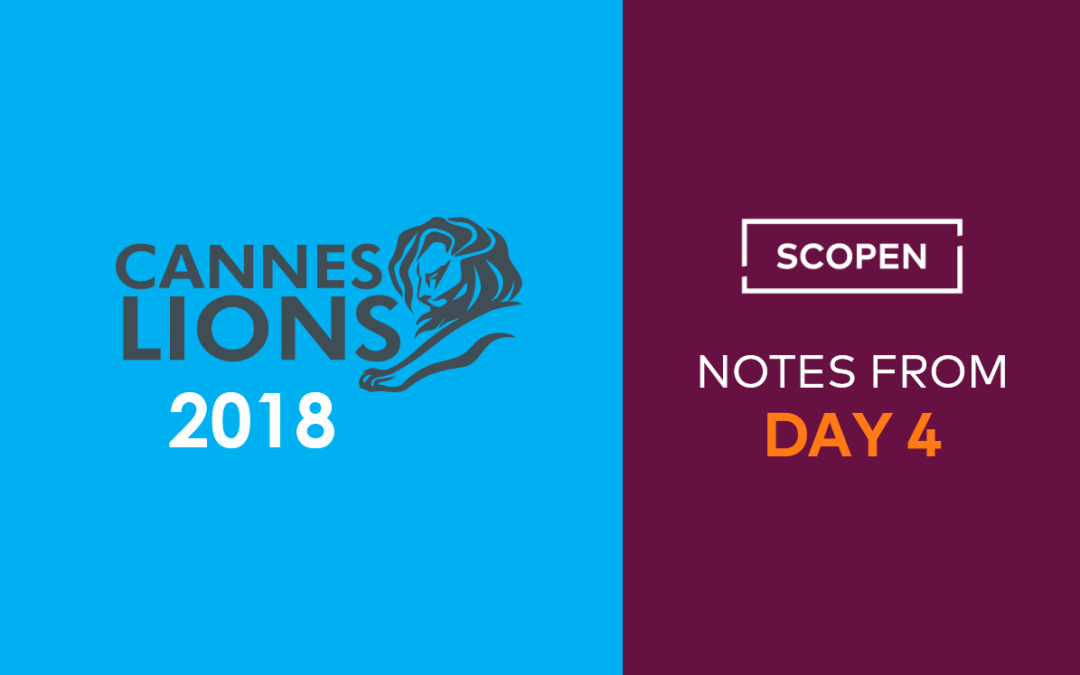 A panel discussion took place formed by the people all working on all of the oceans.  The panel included Simon Le Bon, Duran Duran; Keith Weed, Unilever; Patricia Oliva, Evian; Jeremy Darroch, Sky, and they shared the importance of saving the oceans. If we don’t change our ways, by 2050 there will be more plastic in the oceans than fish who will have disappeared well before that date.

The four companies are investing in start-ups who will produced packaging that will be 100% recyclable. It is important to communicate that plastic is valuable so it should not be used for things where there is only one time usage. Recycling needs to be seen as easy and governments need to stop talking and start acting. Unilever is starting to be concerned about their full value chain and not only the plastic bottles and sachets that they use in manufacturing.

Brad Grossman thinks that creativity is turning a vision into reality within the context of understanding the impossible. He encouraged CMOs not only to become Chief Growth Officers but to become Chief Visionary Officers and to be the most indispensable people within corporations.

The ANA and Cannes Lions have joined forces to focus on growth. They are building platforms and combining forces at Cannes for creativity, and with the CMO Growth Council, aligning CMOs with global leadership and growth. They want to grow their companies but also to grow the values for society. Marc Pritchard, P&G, introduced the Global Growth Agenda that is focused on five pillars and platforms: Technology and Data, Talent, Brand Building Innovation & Experience, Customer Centricity, and Social Responsibility / Environmental Sustainability.

Seng Yee Lau and Tencent shared that it is key to properly combine brand building and growth, focusing on both and not only on growth as many companies are doing nowadays.

Mathilde Delhoume, LVMH, mentioned the same thought by just saying that one day companies may wake up being huge but with no brand identity. It is very important to honor the heritage of brands and to also make products as experiential as possible so that you create desire towards the brands.

Antonio Lucio, HP, pointed out how important it is to put the customer at the centre of all that CMOs do. Consumers expect brands to create hyper relevant experiences and unforgettable content. To do a good job, it is super important that CMOs identify the activities that companies want to produce and implement in-house and those that they want to delegate to suppliers.

The key conclusion, pointed out by Antonio Lucio, is that one of the biggest things that Cannes Lions can do is to demonstrate that creativity helps to drive businesses growth.

What Creativity can do

Google held a seminar to explain how they train people all over the world to use technology and change their lives. They showed examples: 70,000 people in Greece working in the tourist sector and Google is helping them to get out of the financial crisis.  Google is also empowering women in the Arab world, and even providing an app that has helped 100,000 refugees from Syria when they come to Europe, and it still helps 1000 refugees every day.

First of all, when we embark on innovation, it is important to define the objective.  This can be transformational, strategic, operational or emotional. We can identify which of those four types the innovation is by thinking about the time frame of the innovation as each one takes 10 years, many years, weeks or a moment respectively. As an example, Estonia launched e-citizen in 2008 and today it is a fully digital nation, but it actually took 10 years.

Secondly it is important to bear in mind that having long-term vision requires short term actions. By 2030 China has declared that they will become the world’s premier artificial intelligence innovation centre and that many simple actions are taking place now (in schools, companies, government…) to make it happen.

Thirdly it is crucial to think of the return for society and this requires a theory of social change. But every single individual should have a clear point of view of what a social change is, and for some it depends on progress, technology, culture, cycles… and many more options.

The fourth rule is that we need a moral code that will become standard. Two years ago everybody wanted to be an UBER in each category but there wasn’t a moral code behind UBER and nowadays there are lots of questions behind and about the UBER model. Also Google employees complained publicly against Project Moven (a project that got involved in the military and that Google was supporting).

The future of retail

He started reminding us that Amazon bought Whole Foods, that they can buy anything, any company and that they have too much power.

Some of Galloway’s predictions are: