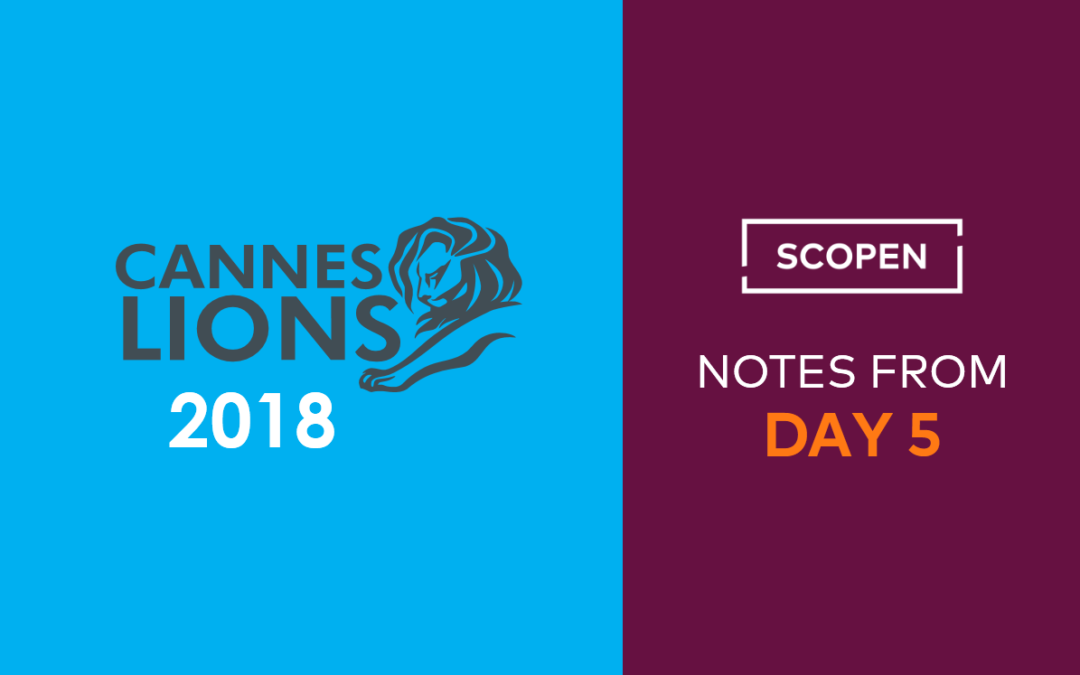 Everything is run by women in the contest these days.  It is no longer about the body anymore but about talent. Girls who were not so proud of their beauty and stayed at home, will be able to demonstrate their talent and get money to study.

Before the penetration of cable TV, Miss America was the second most watched show after the Super Bowl. The plan is to again become the show that brings Americans together as being the most entertaining show on Television.

The challenge is to prepare women for a great world and to prepare the world for great women. Y&R is the agency trying to help the organization to make it work.

The strange power of confidence

Even at Cannes we can all lack of confidence.

Throughout our live there ere are key moments, were we need to make steps forward or backwards and the three key factors that we need to rely on to succeed are:

And Confidence creates momentum, leadership and power. Confidence is what this world needs more of today.

Actor David Oyelowo, joined them to share that his confidence comes from self-awareness, selflessness and being self-taught. He recognized that contrary to other actors he loves to see his own films because he learns from watching them what he needs to do to improve.

He appeared on stage but we were all disappointed for 30 minutes. He interviewed writer Ken Auletta (Friend-enemies) during that time and it wasn’t until 30 minutes later that Ken managed to start posing questions to him.

Ken shared that the biggest problem with media today is that they focus to much on Donald Trump. He doesn’t think Trump will be re-elected whereas Sir Martin thinks he will be.  It might be easy to get 25% of Americans to vote for him again because more than 50% of Americans do not bother to vote.

It is inevitable that there will be more consolidation within the industry.

He realised he made a mistake inventing the word “horizontality” even it is something that is happening today not only in WPP, but also in the other holding groups. All of them are trying to combine their best talent to best serve their clients.

He said he knows clients well and that everyone wants multiple definitions of agencies. We live in a new era that is very different.  All of the holding companies know that their biggest challenge is to know how to integrate their offering in a more efficient way.

Both, Sir Martin and Ken Auletta, feel there will be more legal restrictions for Google and Facebook shortly, especially in Europe.

Ken managed even to ask about the article published last Tuesday in Financial Times and the Wall Street Journal. Firstly, regarding being verbally abusive with people (i.e. his driver), Sir Martin accepted he is not an easy person to deal with and that he is highly demanding. He explained that maybe the Press asked “the wrong 25 people” within WPP for their input on the article, because he has had lots of e-mails supporting and thanking him within WPP and that maybe what he should do is publish those e-mails to show the other side.

To the question regarding using amounts of petty cash for personal expenses he denied it. He repeatedly said that the accusations from FT and WSJ are false.

He then explained again, as he explained in his farewell letter to his employees, that he left because the situation was untenable and that he had to leave for the benefit of the organization. Relationships were coming under a lot of pressure.

Ken said that for him the conclusion is that Sir Martin Sorrell is angry about the situation along with the general environment in the industry which is very difficult. Martin Sorrell admitted he would like to investigate the leaks.

Sir Martin also said he might be “a peanut for some people” but other people have “peanut allergies.”

Ken had asked Sir Martin time ago, if he would leave WPP someday and he responded ‘they will need to shoot me if they want me to get out of here’. So, the question is – was he shot?

(900 entries in this new category)

Independent Agency of the Year

Holding Company of the Year: